Siegfried Holzbauer, a musician of colors in the post-literary age

Ten years ago, the artist Siegfried Holzbauer, who lives in a suburb of Linz, Austria, began to use Datamatrix and SoW codes to convert the German texts of his literary production (poems, diary entries and works in other genres, by others as well as himself) into visual images consisting of juxtaposed squares of colors without separation by line. From these smaller squares the process then formed larger squares and rectangles.
‘’My starting point is always a (self-written) text or a(n old) story which I transform into visual art and often enhance into an installation combined with music. The technique I´ve developed for the transformation of verbal text into visuals (colored rectangles) I call "Quadratur der Worte" / The Squaring of Words.
It is an HTML-based technique: the characters of a given word substitute the figures of the six-digit HTML color-code defining the colors of the cells of a 3x3 HTML table. By this a word gets visualized as a pattern of colors or a grayscale structure and is transformed into a visual texture. The method was explained at the ninth ‘’Gmundner Symposium on Visual Poetry" Oct.11th,1997 in Gmunden/Austria/Europe for the first time’’, says the
artist.

As a result Holzbauer has created what might be regarded as a new
universal vocabulary of color in the painterly tradition of Piet Mondrian,
Josef Albers and others. His mechanical technique marks this body of work as post-literary or "post-cultural’’ .

His art is very close to music in its intense chromatic vibrato, which
makes for vivid colors and a very expressive rhythm, as in jazz.

Text, colors and music- this is the secret of his wonderful art…

Here is an example of how Holzbauer transforms an existing text,
the medieval emblem book, Das Lied vom Hürned Seyfried,
Tafel XXI (I have shown only the imago and the motto, not the
the explicatio that accompanies them). The original motto may be
read beneath its transformation into Siegfried's colorful squares: 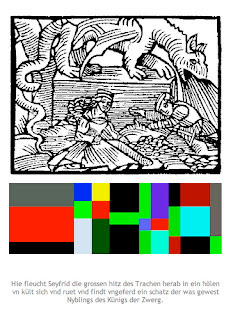 There follow two more of  Holzbauer's machine translations, these
intended for an edition of an as-yet-unwritten segment of MM's
Sentence of the Gods, his universal, cosmological epic. In this
book, called Possibly, nineteenth of 26 in the sequence, Morrison
plans to combine in situ description of the Luso-Hispanic worlds of
South America and Iberia with "an unusually fantastic trope," he says,
of what he calls his "hypertext," the Quijote of  Miguel Cervantes. 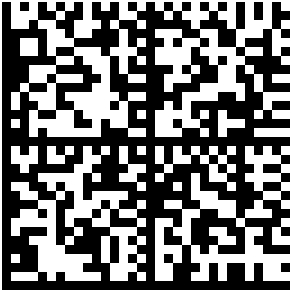 This first, black-and-white image translates what will
will be the text of the title page: "Madison Morrison /
POSSIBLY / Barcelona / The Working Week Press."

This second, color image translates a significant passage
concerning the possible and the impossible from the original
Spanish text of Cervantes' El Quijote, Part II, near the end
of Chapter 17. Don Diego is here speaking to Don Quijote: 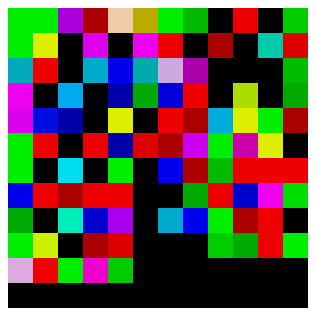 For examples of Siegfried's translations of his own verbal texts
into images see his web site: advancedPoetX.com