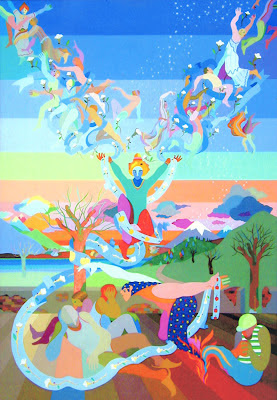 My friend Madison Morrison, a paradigm of contemporary post-culture, has the requisite intuition and social skills for putting in touch with one another intellectuals and artists the world over who belong to the same creative family. When he recommended that I have a look at the work of his friends, Fire and Jorge Cruxent, a unique couple in the realm of contemporary painting, he was sure that our various plastic adventures, along with those of others, would turn out to have many common roots. . .


One of my regrets is that I write for the first time about Fire in her absence. We both recognized from the beginning the things that joined us in our visual philosophy, beyond our merely personal approaches. She told me in a letter that her friend, the artist-poet Nico Vassilakis, and I were ''at first look very different from us [the Cruxents], yet we all use for the most part clean lines and bright colors." I responded by observing that we all prefer as well the juxtaposition of pure colors, instead of mixing them, and are fascinated by the reductive forms, non-temporal in nature, which lie behind the figurative world. I loved the art of the Cruxents too and was very surprised to notice that Jorge's style of drawing belongs to the same family as that of an Argentinian artist, Xul Solar, whom I very much appreciate, a contemporary of Paul Klee, with a similar vision, but unfortunately not so well known. He was a good friend of some of my favorite writers, J. L. Borges and Ernesto Sabato.


Fire's words about the special collaboration with her husband Jorge (similar to the method whereby renku, a form of Japanese poetry, are created) glitter now in my soul like musical notes in a Bach concerto:

''Jorge and I work together . . . he, the designer, and I, the colorist, in the painted pieces. He does free form and pen and ink drawing that I don't paint, and I construct photomontages alone in my corner. . . . Our work is figurative, creating a narrative that is abstract. . . . It is my technique to take a drawing whose areas are defined by line and to paint each area without texture or shading. Jorge Cruxent constructs the drawings such that there are no simple lines. For instance, no twig or brow can be defined by a single line running out into space, else the color beneath and below surround and devour it. The demands for my colorations are that anything to be represented in the composition must be defined as a closed area. The drawings themselves are linear but, when painted, the lines are subsumed by the areas. Their singular dimension shifts into the planes’ duality. If the original linear forms that I transform into their future planes are to remain visible, they cannot share exactly the color of any bordering area.''


As in Bach the musical network of lines by Jorge and the ensemble of Fire's striking colors join in a moving vibrato to touch and enrich the amplitude of our inner lives.

Please join us on Sunday March 9th 2008 to celebrate fire's life. The party begins at 5PM and takes place at Jules Maes Saloon in Georgetown 5919 Airport Way S., Seattle. There will be a band playing and we will have an on going slide show. Food and drinks are available at the full bar. Anyone attending has to be 21 or older. Looking forward to seeing you there,
Isis, Morgan and Mita

Hi! I'm Ferran Serra! I've just found your artlist on artreview. You can see my ballpoint pen drawings on my blog:

I miss Faya.
I miss Jorge.
Does anyone know how I can contact Jorge?